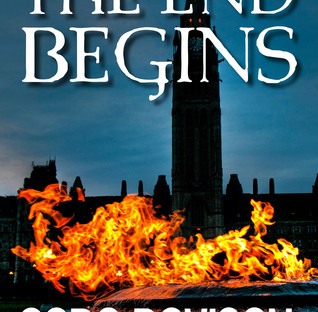 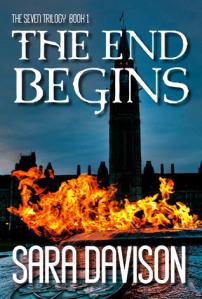 The End Begins by Sara Davison
My rating: 5 of 5 stars

It’s October of 2053. After a series of terrorist attacks, for which a fringe Christian group has claimed responsibility, Canada is under martial law. For feisty Meryn O’Reilly, soldiers storming into the service of the Kingston church she attends is just the beginning of trouble in Sara Davison’s futuristic romantic suspense The End Begins.

For his part, Captain Jesse Christianson isn’t exactly comfortable with enforcing orders to detain and question “… every adult in the building.” This day he lets Meryn leave with only a warning. But the memory of her spunky attitude and defiant blue eyes won’t leave him alone.

More trouble follows for Meryn when she secretly orders Bibles and begins smuggling them to whoever she feels needs them the most. Inevitably the ordered and predictable life she knows becomes something else altogether in the Christians-are-lepers social climate. Meanwhile Jesse fights his own war between duty and desire.

Davis’s story gave me an appreciation for the freedoms we still have. At the same time it made me consider a lot of what ifs, like, what if it was illegal to be a Christian? What if it was against the law to own a Bible? What if obeying God meant committing civil disobedience? The End Begins is a gripping story of a fictional future I hope the Christian church doesn’t have to face any time soon. And, as the title implies, it’s only the beginning. This is the first book in Davis’s The Seven Trilogy.

The book ends with a set of discussion questions making it a good choice for book clubs.

The End Begins is part of my own Kindle collection.

Get my Artist / Author newsletter