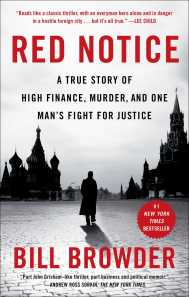 Red Notice: A True Story of High Finance, Murder, and One Man’s Fight for Justice by Bill Browder

With a special talent for sniffing out stock that would make money for his clients, Bill Browder and his company Hermitage Capital did very well beginning in the mid-1990s from their headquarters in Moscow. Then came November 13, 2005.

That day on his return to Moscow from London, Bill was detained at the airport and kept overnight with no food, water, or explanation. The next morning rough officers escorted him to the departure lounge and put him onto a flight back to London.

It was the beginning of an ordeal that lasted for years and put him in the bad books of Putin himself. Though Browder had begun fighting the dishonest Russian oligarchs while still working in Moscow, the backlash he experienced then was nothing compared to what happened next.

A raid of his Moscow office (after he was kicked out of Russia) and the office of his lawyer resulted in his companies resurfacing registered to new owners. They went after him for tax evasion of millions. However, a tax audit proved he had over-paid his taxes. This set him and his Russian lawyer Sergei Manitsky on the track of a crime ring of corrupt police officers, bankers, and petty criminals. Unfortunately, the chase ended in murder.

This book opened my eyes to the rotten center of Russian business. I’m sure that criminals like computer hackers are considered the lightweights of white collar criminals in a land where the decay starts at the top.

An interesting sidebar to the book: one of Browder’s contacts in Moscow and to whom he told his initial story of corruption was Chrystia Freeland. She was Moscow Bureau Chief of The Financial Times when she interviewed him (1998-ish). She is now a Liberal MP and has recently been appointed Canada’s Foreign Minister. She is also persona non grata in Russia.

The YouTube video linked below was made by Browder in 2010 to help expose the complicated web of criminal activity. It adds background and clarity to the story of this fascinating and disturbing book: Russian Untouchables – Episode 1