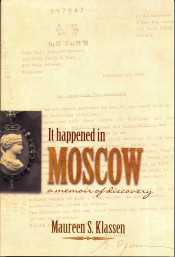 It Happened in Moscow: A Memoir of Discovery by Maureen Klassen

It Happened In Moscow begins with a surprise phone call to Herb and Maureen Klassen’s Moscow apartment in 1993. That call opened a Pandora’s box of secrets.

Herb’s parents (C.F. and Mary Klassen) had immigrated from Russia to Canada in 1928 in the nick of time, just before the doors to exit Stalin’s Communist Russia slammed shut. Though Mary’s children knew that she was a divorcée at the time she married C.F., she rarely spoke of her early life and never mentioned her 10-year first marriage. Even Harold (her son by that marriage) only found out about his birth father at his 16th birthday when C.F. and Mary sat him down to reveal the truth. Both C.F. and Mary had since died, so many questions about Mary remained unanswered.

Now the female voice on the other end of that phone call claimed she was Harold’s younger sister Erika.

If this was indeed so, could Erika hold answers to the mystery of Mary’s first marriage? Did she know what had happened to Mary’s first husband (and Harold’s father)? Could she shed light on how an entire generation of Russian Mennonites had fared during that period in Russia?

It Happened in Moscow is memoir—the unfolding of a fascinating family discovery through Maureen Klassen’s eyes. In 1993 Maureen and Herb Klassen were working for Mennonite organizations in Moscow and were fluent in Russian and German. These things made them the perfect recipients for the information that Erika had gleaned in her search for family. Via Erika, the family learned the fate of Jacob (Mary’s first husband) and thousands of Mennonites who were hindered from or chose not to immigrate from Soviet Russia.

Maureen Klassen’s charitable depiction of the two main players in this tale (Mary and Erika) make this an uplifting and pleasurable story to read. Historically, the way it shines a light on years of religious repression under the Communists makes it an integral piece of the Mennonite puzzle. It is also a testimony to God’s faithfulness through generations.

If you’re interested in Mennonite history or even just enjoy a well-crafted memoir with lots of human interest delivered in cultural detail with historical accuracy, you’ll love this book.

(My sister-in-law who, with my brother, lived for a time in Mary’s “glasshouse” in Clearbrook B.C., lent me this book.)