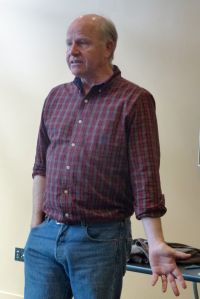 “Words Becoming  Flesh: Writing for the Stage” was the first workshop I attended Saturday morning of Write! Vacouver. Ron Reed taught it. He is the creative director of Pacific Theatre as well as a playwright and actor

My ‘history’ with Reed and Pacific Theatre goes back to about 2002 when I saw Reed act in the incredible one-man show Father Damien.

A few years later, Pacific Theatre had a poetry contest and one of my entries won a spot in one of their Christmas Presence performances. The prize (besides a ticket to the performance to hear Ron read my piece) was tickets for hubby and me to the rest of the Pacific Theatre’s offerings that season. We renewed our season’s tickets for several years after that (until the language of some of the plays got a bit too much for us). So I saw firsthand what excellent work Ron does and inspires in his company.

Why I chose this workshop:

1. I have great respect for Ron Reed as an artist and an articulate Christian. Whenever he spoke at Pacific Theatre performances, or I read what he had to say in his blogs or in the paper, he got me thinking.
2.  I am not a playwright nor do I have any desire to learn to write plays. However, just over a year ago I received good advice about my novel from a friend with script-writing experience  and  I was sure that Reed’s words to playwrights would be applicable to novelists as well.

For starters, the title of the workshop was perfect, and Reed riffed on its meaning in his opening statements: “Drama is different than other arts. The script is the score but not the actual art. Drama is a flesh and blood art, where the audience breathes the same air as the actors. They respond to the living persons in the room.”

Reed continued by explaining how for him, theatre resembles what Jesus did in the incarnation. “The words of the script become His flesh and live among us. The fundamental nature of that playing is profoundly Christian.”

Early on, Reed described how he prepared for Father Damien in the way he entered the world of his character by studying his history and constructing an entire world and mental state for him. This enabled him to ‘become’ him on stage.

Concerning sets:  “The best theater designs take away the pieces so that the audience has to provide pieces of the setting. LESS IS MORE.”

A play is structured like a story is told: with a view to answering  “What happens next?”

According to Reed, here’s how a play works:

That character lives in a world of status quo until something happens. That’s called the precipitating or inciting incident. The main character believes ‘Now I have to do something to make it be how I want it.’

The inciting incident happens almost instantly in modern plays. It’s not just anything happening but something  that advances the story. You must make the incident matter.

During the second phase of the story—most of the play—the character tries things to get the equilibrium back. If what he does works and he achieve his goal, the play is over. But if not, more problems result and accumulate. This is called reversal.

Continued action is required to deal with how things are now. The character must do the next thing. The play is a sequence of these actions.

!. Circumstance of the moment.
2. What the person wants = his carrot.
3. He makes a choice
4. Takes an action.
5. There’s a consequence to what he does.
6. The world is now different than before he took the action.

Reed likened the working of a play to falling a row of dominoes or activating one of those ball mechanisms where each action of the ball triggers another happening.

In the bulk of the story this keeps recurring as the stakes get higher and higher, more and more urgent, and the consequences grow bigger and bigger. Through all this what’s inside the person becomes visible.  We see their desire and their desperation. The actions reveal the heart and that’s what plays are for. The choices made reveal the person’s values, what they will fight for.

The third part of the story is the home stretch. This is when the course of action becomes do or die. He will win or lose the girl, gain self-respect or fall into a pit of loathing, control all the drugs or be shot to bits. When the consequence of that happens, there is no more story. The story is done.

The play is over when the central story is resolved, or seen to be unresolvable.

This is called the  three-act structure, no matter how many actual acts or scenes are in the play.

Act 1 – What’s the world like until the first action is taken. Character up a tree.

Act 2 – All the actions and setbacks. Throw rocks at him.

Act 3 – Final effects of the thing. You get him out of the tree.

Reed left us with a reading list of books, helpful to playwrights:

Story  by Robert McKee – book on screen-writing-writing (Reed described it as ‘very detailed and formulaic’ but the book to read if you want to write scripts).

Backwards & Forwards  by David Ball  – A technical guide for reading plays. He basically says, if you start at the end and go backwards, each domino fall will lead you to the one before.  (Reed described reading a play like this as a way for directors to see what scenes to cut).

The Playwright’s Process  by Buzz McLaughlin.

Creating Theatre  by Morrow and Pike

– Imagining and creating the character’s world, history and internal feelings—whether they’re patterned on a real person, or drawn from imagination.

– We give our characters lots of trouble. This reminds me of James Scott Bell’s plotting advice: “No conflict = dull. No trouble = readers are tempted to put the book down” – Elements of Fiction Writing: Conflict and Suspense, Kindle Edition p. 82.

– We use trouble to reveal what’s inside our characters.

– Though we have more room to delve into a person’s consciousness when telling a story on the page than the playwright does on the stage (Reed described such internal  thought bits as “therapy”: “We want to see characters, not talking about something but acting.  In a play things happen. It’s not a therapy session of what people are feeling”) it would probably be a good exercise to imagine those internal scenes on a stage so that we don’t let them go on too long and get the story bogged down.

All in all, it was a fascinating—and entertaining— talk.