Biblical fiction is a genre that helps the Bible come alive for many readers. A nice thing about books in this genre is that they’re virtually timeless.

Over the years I’ve read and reviewed quite a few stories based on the lives of Bible characters. In the days ahead I’ll be reprinting some of those reviews here along with other biblical novels reviewed here for the first time.

Today I’m resurrecting a review of Lynn Austin’s book Gods and Kings: Chronicles of the Kings #1

. First released in February 2005, the KINDLE version of this book is currently  FREE!! (but I don’t know for how long, so don’t tarry if you want it).

Here’s my review, excerpted from a longer version on Blogcritics.org. 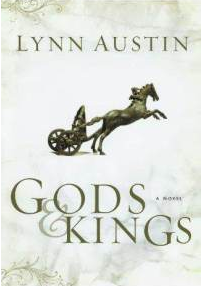 Gods and Kings is Book 1 in the biblical fiction series Chronicles of the King  by Lynn Austin. It begins in the early years of Judah’s King Ahaz, just as Aram is about to lay siege to Jerusalem. It ends with the coronation of King Hezekiah.

The cast of characters follows the biblical account pretty closely. It includes King Ahaz, his wife Abijah, her father the priest Zechariah, the high priest Uriah, and prince Hezekiah. Minor appearances are made by Hezekiah’s wife Hephzibah, and the prophets Micah and Isaiah. Shebna, Hezekiah’s Egyptian teacher along with many other bit-players, are fictional.

Several elements worked together to make this book a worthwhile read for me.

One of them was in the area of plot, and Austin’s interpretation of how godly belief lines were preserved in ancient Israel. Often when reading the stories in Kings and Chronicles, I’ve been struck by how a God-fearing king is followed by one who is idolatrous. I’ve questioned how that could be. The fictionally-expanded events of this story illustrate that possibility in a compelling and believable way.

A theme element I really appreciated was the analysis of compromise in the character Uriah (Ahaz’s high priest). Promoted from priest to palace administrator, Uriah starts out with the intention of using his position to influence Ahaz away from idolatry. But a series of forces, including his own lust for power, greed, and international pressure, serve to make him, by the end, a promoter of idol worship instead of an opponent.

In the setting department, I felt this book succeeded in educating me about a different time and place—one of the reasons I enjoy reading historical fiction. The descriptions of the idol worship ceremonies were especially compelling, as was the description of the meeting of King Ahaz with the Assyrian King Tiglath-Pileser in the captured city of Damascus. Here is some of that section, to give you a flavor of the setting and Austin’s writing style:

“…they mounted his chariot riding in silence to the ruined city. Ahaz struggled to conceal his shock and horror as he saw evidence of the Assyrian’s atrocities. On either side of the road that led to the main gate, row after row of bodies hung from tall stakes.

“The emperor would like you to meet the chief elders of Damascus,” Jephia said. “They were impaled alive and left to die, watching the destruction of their city.”

Ahaz gazed straight ahead, holding a linen handkerchief over his mouth to keep from vomiting. A sign above the gate read: This is the fate of the enemies of Assyria….. (p. 141 – page numbers from the paperback edition)

I found Gods and Kings an engaging and worthwhile read. It left me with the sense of how God was capable of working in the life of a nation, and in the lives of individuals. Austin has left just enough loose ends at the end of the book to tempt readers to search out  Song of Redemption (Chronicles of the Kings #2)