Permission to Write was a panel discussion that was part of Write! Vancouver (May 25). The panel was moderated by Lesley Bentley. On the panel were K. C. Dyer (author), Marc Cote (Publisher, Cormorant Books), Ken Shigematsu (Pastor), and Ron Reed (Playwright, Actor & Creative Director of Pacific Theatre).

Why I chose this workshop:

I would be lying if I said that I don’t sometimes think of quitting. A lot of things play into this: the amount of work it takes to not only write but then find a paying home for that writing, the long road to book publication and after publication, publicizing, marketing, and selling the books; the volume of words already out there these days—and the feeling that my words are just adding to the noise; and physical weariness. Writing may seem like a cushy job. But brain activity is exhausting, at least for me.

Permission to Write – Highlights from my notes:

Lesley Bentley invited the panelists to talk about what permission to write meant for them.

All kinds of things can interfere—things that are essential. We ask ourselves, how will the world even know if I don’t write. You have to assertively make that room.

He feels that God has given him permission but he has to give himself room, take seriously that permission to write. 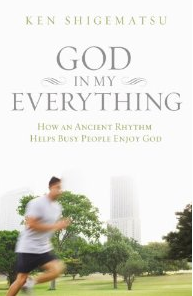 Ten years ago he started writing about adapted monastic rhythms. Interest sparked and he wrote some more. The writing was a reward in itself. (His book God In My Everything: How An Ancient Rhythm Helps Busy People Enjoy God is scheduled to be released by Zondervan in August).

Find time in the middle of other things. You have to get your butt in the chair, words on the paper. Speak it into your phone. It’s like any other job: if you’re a writer, it’s a job. If this is who you are, be true to yourself and do it. 500 words a day leads to a 150,000 word book after a year.

“People who have to write, don’t think about permission too much.” (Don’t remember who said this but I liked it)

Writing to express oneself is not writing but journaling. Journaling is like the 5-finger exercise in piano. People write to communicate. Put your running shoes on first before you dream of the glories of winning a marathon.

How do you square the results you can see in measure with permission based on the premise that it doesn’t count without an evangelistic, or money result.

Listen to the voice of the Holy Spirit.

There will always be roadblocks in the way. People put arts last in their lives. Sometimes we throw caution to the winds. We need to set aside the million balls in the air and work on it (our writing). Clear enough space in your head. Find your own place of peace where the ideas come to you. Fifteen minutes a day can become your time.

It is worth writing. We wouldn’t be in the room if we didn’t think it’s so. It’s worth doing it whether I win or not–for the doing of it. (“Im at the extreme end of intrinsic rewards type of guy.”) Whatever the reason it takes to get the fingers moving–do it. “I get demotivated when it has to be good enough for people. Permission to write has to do with motivation. Print the poster.” When you’re writing it, you can’t know what’s really great or not. Just type – it might be better than you think. Don’t get stuck on your first play.

Let’s explore the statement that permission to write has to do with motivation.

Told the story of an agent who sent him a manuscript from a writer he respected, but he didn’t feel he could publish it. He eventually was asked to explain to the author what didn’t work for him.

The author ended up turning down another offer on her book to take several more years to rework her story keeping in mind his suggestions. Coromorant Books recently published her book, it has been garnering good reviews and that day  (Saturday, May 25th) it (Matadora by Elizabeth Ruth) had a glowing review in the Globe and Mail (Cote waved the paper before us as proof))

Concerning motivation: “She carved out the time (years) to write the book that was inside her all the time.”

It’s like runner’s high. That moment when you know you’ve nailed it.

Part of the joy of it all is in the doing. It’s not going to come easy. When do runners experience a runner’s high? After a long run.

It’s worth doing. We’ve heard fifteen ‘worth it’s.’ We are highly encouraged to consume; we are not encouraged to create. God said it’s okay – Genesis 1-3: “It is good.” We are in His image and likeness: He makes stuff and enjoys it. It’s coded into us.

It’s very important that you read. Every writer comes to writing from being a reader first. Reading is significant to growth and ability as a creator. Always be learning. You can have this career for the long haul. Keep trying to get better. Read widely, often, and much.

Playwrights need to watch plays. You intuitively produce what you take in. If you want to write a literary book, you might be best not watching TV.

“It’s remarkable what you learn from reading poor writing.”

If your time for reading is limited, only read good things.

Narrow your reading – not for your whole life but for the time you’re writing a certain play or certain thing.

Someone asked a question leading to a discussion on how to recharge when your writing (not necessarily creative things, but writing emails, and other assigned writing) makes you feel weary and like you’ve run out of words:

Writes by hand in her journal, vs. at the computer on a keyboard.

Books are a safe place for your brain and ideas to meet. Pretend that no one is ever going to read it.

You can write with similar rawness to how you would write a journal.

“Get a tough enough skin. I didn’t write a role model. I wrote that play so other people could think about certain issues. It takes a certain brashness to put some things out there.”

Closing challenge was by Reed, who kept reminding us to keep putting words on paper/the screen He told the story of how he had begun a novel, quit and put it aside. Years later he came across it again and is now using ideas and snippets of it in a different project.

“Write stuff, and later you might find out what its purpose was. The words are what you’re going to carve something else out of. One thing can become another thing, and another thing. It can be a play, an email, a poem, part of a lecture etc.”

– I felt reassured by the advice to enjoy and revel in my urge to create; it’s God-given.

– I loved Leighton Ford’s advice to Ken Shigematsu: “No one will be able to write like you.”

– I could so well relate to the discussion around the fact that writing is a self-motivating job. As Reed said: “… all kinds of things can interfere–things that are essential. We ask ourselves, how will the world even know if I don’t write. You have to assertively make that room.”

– Another thought that I really liked was that we don’t always know, when we’re writing something, what it’s end-up purpose will be. We may journal and forget entirely about what we’ve written, only to reread it at some later time and find it is the perfect illustration for a talk, or the germ of a poem, story or essay.

I hope my recap of this discussion will help you find permission to write as listening to it firsthand did for me! What resonated with you?