I’m delighted to be joining the celebration of former U.S. Poet Laureate Billy Collins and his 76th birthday on March 22nd. (Thanks to  Heidi Mordhorst and others for the suggestion and heads-up on this!)

Though I don’t have any complete books of Billy Collins’ poetry, I’ve come across many of his poems online and have heard him read and lecture on YouTube. I always enjoy his work. To me it has a Seinfeld-ish vibe—poetry about little inconsequential things that are almost nothing, but in his hands become big, consequential metaphors of life and relationships.

The Poetry Foundation is where I found the poem of his that jumped out at me for today’s celebration. We in Canada are celebrating too. This year is our 150th Anniversary as a country. I’m helping to edit, for our local poetry society, an anthology in honour of that birthday, so I’ve read quite a few poems about Canada lately and was delighted to find a poem of Billy Collins’ called “Canada.”

I am writing this on a strip of white birch bark
that I cut from a tree with a penknife.
There is no other way to express adequately
the immensity of the clouds that are passing over the farms
and wooded lakes of Ontario and the endless visibility
that hands you the horizon on a platter.

I am also writing this in a wooden canoe,
a point of balance in the middle of Lake Couchiching,
resting the birch bark against my knees…

I used Collins’ “Canada” as a mentor poem for my own Canada poem:

I am writing this on a beaver tail
that my camera captured
beside a dammed prairie stream
under a canopy of blue
that sets off bordering quilt blocks
of yellow, brown and gold.

I am also writing this in Tim Horton’s
where I have just rolled up the rim
to “Please Play Again”
and am thinking of ordering
another coffee along with more hope
of a CRV, TV or even a Tim’s card
to help colour the long white winter.

O Canada, as the anthem goes,
scene of massive mountains
and mosquitoey lakes,
you are the memory of Mountain Lake,
the one-room school on the Saskatchewan prairie
where I learned to skate and spool knit
play Rook and binge read
sumptuous fare: Pookie and Old Yeller
My Friend Flicka and Thunderhead
Caddie Woodlawn, White Fang
Pat of Silverbush and Mistress Pat
which wondrously arrived
from time to time
in a traveling box.

O Canada, I want to be friends
as long as my memory lasts
to snap the bluebells in spring
and herons in fall,
cool off with Iced Capps® in summer
hibernate with poutine in winter
knit toques and pick Saskatoon berries
with only the occasional foray
over the line.
See that north-moving row of cars
approaching the Aldergrove crossing?
The woman in the passenger seat
of the blue Honda
wiping Edaleen ice-cream off her hands
before she digs for her passport
is me.

Happy Birthday, Billy Collins (and Heidi Mordhorst, who also has a birthday in March)!

This post is linked to Poetry Friday, hosted this week by Heidi Mordhorst and her blog My Juicy Little Universe. 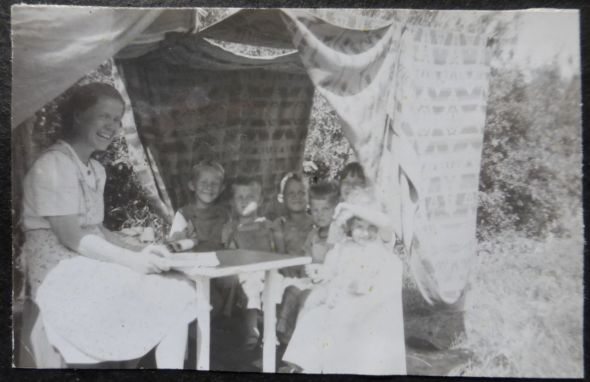 I remember the holes in the green roll-down blinds
and how they looked like a starry sky.

I remember caramel-colored fly paper
hanging twisty from the ceiling
dotted with black.

I remember making cakes and cookies
when we got to play with water in the sandbox.

I remember lying sick on the couch
and how the flowers in the living room curtains
became faces.

I remember angel food cake
and strawberries with whipped cream
for every birthday.

I remember licking the beaters.

I remember Saturday work
and how much I hated it.

I remember washing the cream separator last
and how slimy the dishcloth got
in old soap and lukewarm water.

I remember early wash day mornings
with the sounds of the chugging machine
and daddy playing quartet records
while he waited for another load
to hang on the line.

I remember starting the fire in the sleigh—
the smell of kerosene and smoke
and how one side of my leg
would soon be sunburn-hot.

I remember grape juice and pop—
our Christmas dinner “wine.”

I remember spring evenings
full of the drone and ribbet of frogs.

I remember the smell of earth
and the wind holding its breath
just before a summer rain.

I remember the gentle sound of grazing chickens
on summer holiday mornings.

I remember how prickly nervous I got
gathering eggs from nesting hens.

I remember the smell of the kitchen
when Mom made pickles.

I remember the smell of wheat
in the fall when Dad was combining.

I remember the sweet-sour caramel crab-apples
Mom made for fall picnics.

©2016 by Violet Nesdoly (All rights reserved)

I decided to take the April 29th NaPoWriMo challenge of writing an “I remember’ poem:

“… write a poem based on things you remember. Try to focus on specific details, and don’t worry about whether the memories are of important events, or are connected to each other.”

I discovered, once I got started, it was hard to stop! The poem contains only a few of my memories. Are they anything like yours?

And with that I come to the end of  poem-a-day National Poetry Month 2016! It was fun posting a new poem every day, even though sometimes a little hectic. Of the 30 poems I published this April, 28 were newly written this month. Thanks for all who came by to read and leave a comment!

I’ll now get back to my usual about twice-a-week posting schedule. 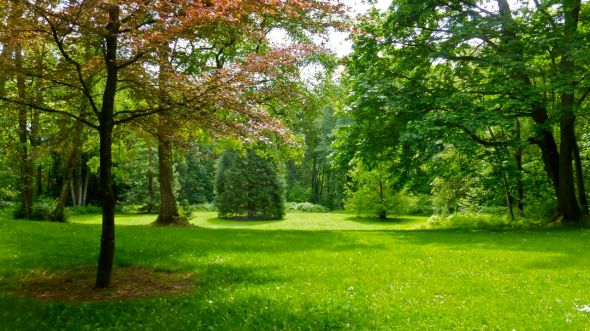 n response to yesterday’s question at Wonderopolis: “How can you make Earth a better place?” I thought of all the things we can learn from created things. However, for me the purpose and destiny of Earth can’t be separated from its Creator, His incarnation, and the privilege we earthlings have to bear witness to His place in it all. 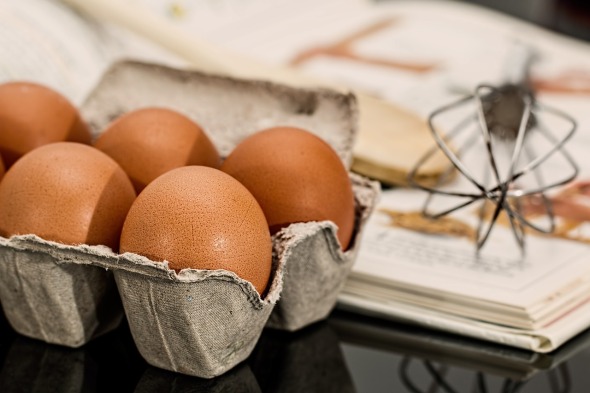 My thing to eat

Not too sweet and not too savory
not a bread and not a cake.
Not a square and not a doughnut
in a pan of cups must bake.

To your basic butter, flour
sugar, eggs and leavening
you can add whatever’s handy
you can add most anything!

Food of breakfast, lunch or snack time
served with any drink a treat.
Streusel-topped, so rich and yummy
MUFFINS are my thing to eat!

When one of the prompt sites I consult during April suggested a poem about food, I knew just what I wanted to write about. You see, on our recent jaunt to the Island, one of our group recommended a fabulous muffin, available from a market kiosk in the ferry terminal. This wheaty, nutty, flaxy, carroty, fruity concoction transported me to muffin heaven. And so the poem.

I love baking muffins too. The Spiced Squash Muffins I made for Christmas morning (pictured below) were topped with crunchy sugar-cinnamon goodness and filled with dried cranberries. The recipe is here.

This post is linked to Poetry Friday, hosted today by Laura Purdie Salas at Writing the World for Kids (where she’s writing a whole series of putrid poems for National Poetry Month—pimple popping, head cheese, a mouthful of ocean water anyone?).

Two little people in my family have birthdays this month. I set out a couple of weeks ago, after we’d spent some time with these littles this summer (they live far away from us), to write a birthday poem for each. Well, I got one written, and then a long break and finally last week, wrote the second one. I spent some delicious hours yesterday using Comic Life to combining my writing with photos. Today those poems, mounted on stiff paper, are going in the mail. I’m sharing one with you today. I hope you enjoy this poem for my 6-year-old grandson. 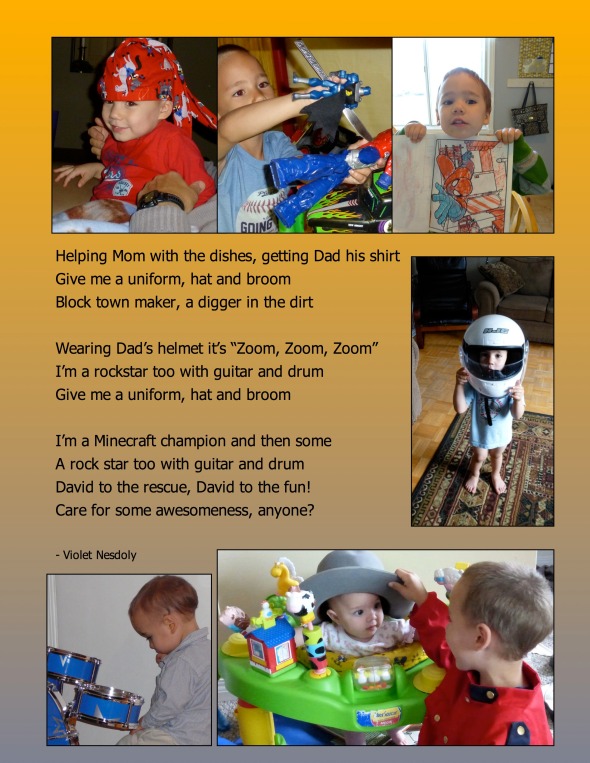 This post is linked to Poetry Friday, hosted today by Linda at Teacher Dance.

Duncan, my dear, take me to the Mardi Gras
to the outrageous hurricane eye
for the mother and child reunion.

Just because I was not born under African skies
not born in Puerto Rico doesn’t mean I don’t belong
in that Kodachrome Graceland of peace like a river.

Wartime prayers sung to an American tune—
there was something so right about that song
sung by Darling Lorraine.

You can call me Al if you like
the obvious child hearing spirit voices of father
and daughter—still crazy after all these years.

Can’t you hear that hearts-and-bones
train in the distance, while we sit here stranded
in a limousine of the late great Johnny Ace?

You be the boy-in-the-bubble
born at the right time, slip slidin’ away
into the cool, cool river. Adios Hermanos.

It’s late in the evening. He’s gone at last.
Now it’s just me and Julio down by the schoolyard
imagining what they’ll say:

“He was quality.
She was last seen wearing diamonds
on the soles of her shoes.”

*********
A lovely surprise phone call from the contest administrator of The Ontario Poetry Society (TOPS) delivered the news that “Paul Simon reunion,” above, earned an Honourable Mention in this summer’s Sparkle and Shine Contest.* Another entry of mine (“Christmas on the Wet Coast”—of which an earlier version was published on this blog, but prior publication was okay) earned a Judge’s Choice award. Both will find their place in the Sparkle And Shine Anthology due out later this year.

I was especially thrilled at the placement because the contest’s judge was Jan Wood, a friend of mine (no worries about favouritism hanky-panky though, as there was no I.D. on the poem entries) who is an amazing poet and a frequent winner in all kinds of Canadian places.

TOPS runs many contests, with reasonable entry fees, quite a few open to non-members.  Check out the list of upcoming contests HERE and join in the fun!

This post is linked to Poetry Friday, hosted today by kids’ poet extraordinaire, Amy LV at The Poem Farm.

(And what, you may be asking, is a “Sparkle and Shine Contest”? The theme list on the contest guidelines almost reads like a poem itself: